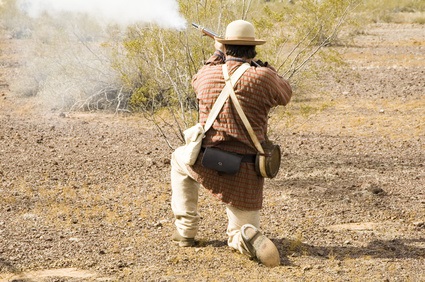 Those who choose to muzzle load are using the same skills the early frontiersmen used to tame a nation. Muzzle loading allows hunters to reflect on the deeds of these men and their rifles. What makes muzzle loaders unique is that hunting with a muzzle loader is a choice. A muzzle loader presents a different level of challenge than a standard rifle. Muzzle loaders add a new level to hunting not found with other weapons. To that end, muzzle loaders also take a certain knowledge to safely load, shoot, and maintain.

Loading a muzzle loader is a skill that requires a critical level of attention to detail. The mishandling and misloading of a muzzle loader can cause harmful and potentially fatal accidents. Like any firearm, muzzle loaders always need to be handled with care, especially when loading, and proper guidance is necessary. This guide will walk you through efficiently and safely loading a modern hunting muzzle loader.

Muzzle loaders are, in general, the earliest form of firearms. Modern hunting muzzle loaders have changed quite a bit since the days of the revolutionary war, but they also remain the same in many ways. The musket and modern muzzle loader both require skill and dedication not common with other firearms. Muzzle loading firearms can be described as a rifle, shotgun, or pistol that is loaded from the muzzle, with a round ball, load of shot or a conical projectile. These weapons are often single shot, save for the occasional double barrel weapon, and must be reloaded after every shot.

Modern inline muzzle loaders give shooters a much lighter and much more reliable weapon than traditional muskets. The method of loading, firing, and importance of marksmanship remains the same. Modern muzzle loaders have improved on safety, reliability, and accuracy.

Muzzle Loaders do not use a modern self-contained cartridge; instead, they require three basic components the shooter has to load. Black powder is the first component. Black powder is the propellant for the charge and is distinctive for throwing a big black cloud of smoke after a shot is fired. The second component is the actual bullet; modern rounds are conical and fly much more accurately than the old round balls. The third component is your cap or primer. The cap or primer creates the spark that ignites the black powder thus propelling the bullet.

Muzzle loading has a slight learning curve for many of its processes, including loading, cleaning and firing. Make no mistake, hunting with a muzzle loader takes resolve and discipline. Muzzle loaders offer a single shot, and the hunter must aim true, and choose the right shot to take. Rushing a shot, or picking an inopportune one can very easily result in a miss.

Loading a muzzle loader is much different than loading a regular rifle. In a way, you are hand loading a projectile and a rifle at the same time. Let's go over how to safely and properly load a muzzle loader.

Step one: First, before all else, make sure the rifle in not 'primed.' To do so, you check the 'nipple' of the muzzle loader. On a traditional (or classic style muzzle loader), this is below the hammer; the nipple is where the hammer falls. On an inline muzzle loader, the nipple is inside the breech. The breech is the opening on the top of the weapon, above and forward of the trigger group. The nipple will be where the striker rests when not cocked.

Insuring the nipple is not primed is a safety measure to prevent an accidental discharge, which could be fatal at worst or, at the very least, damage something around you.

Step Two: Cleaning the barrel of even an unfired muzzle loader is important. Some muzzles may have moisture or oil in them, even if they are brand new. Used muzzle loaders can have oil, moisture, and fouling inside them. Oil and moisture can affect the reliability of your black powder, and fouling can affect your accuracy. Use the barrel rods from a rifle cleaning kit to run dry patches through the barrel. These dry patches should absorb the majority of the oil, moisture, and clean any fouling. To ensure the remaining moisture and oil is removed, fire two percussion caps through the barrel. Do this outside as it is loud and you are still discharging primer material.

Step Three: Measure the correct amount of powder into your powder measure. Next, have the rifle pointed upwards in a safe direction. Deposit the powder from the measure directly into the muzzle. As a safety precaution, always use a measure, and never 'guess' the right amount of powder. Results can be harmful and quite disastrous. The final step in loading the powder is called the tap dance. You will gently tap the rifle on its side, this helps settle the powder.

Now you need your ramrod, which is the stick underneath your barrel. Slowly insert the ramrod into the barrel and begin slowly applying pressure to the bullet. Increase pressure when necessary to press the bullet fully against the powder charge. This process is not difficult, but must be done correctly. Without a tight fit against the black powder charge, the black powder will not reach its desired pressure to effectively propel the bullet, and can cause calamitous results.

Step Five: The final step is installing the primer. You can very easily set the primer or cap onto the nipple with little trouble. Always handle primers and caps carefully. This should not be installed until necessary. For example if you are hunting the next day and load the rifle the night before, it does not need to be primed immediately. Since installing the primer and cap is so easy there is no reason to do so if the rifle is not going to be fired anytime soon. In short, it is simply safer to install the primer later.

When firing, the shooter should use a nice and comfortable shooting position. This position is the base on everything that marksmanship will be based. The non-firing hand should be placed a comfortable distance on the fore end of the rifle. The firing hand should be high and tight on the rifle's grip. The shooter should position the elbow of the non-firing arm under the rifle, not to the side of it.

After forming a good cheek weld to the stock, the shooter needs to focus on the front sight. If using iron sights, the front sight should be easy to see through either the peep sight or between the notches. The focus should remain on the front sight and not the target. The target will appear blurry, but this is necessary to score a good shot.

The body should be as relaxed as possible. This will allow for a natural point of aim and reduce the chance of throwing the shot. Breathing should be slow and steady and the rise should rise and fall as you breathe. The key is too find the magic moment between breaths where your shot lines up.

The most important aspect is the trigger squeeze. The trigger squeeze should be slow and steady. The trigger pull should be uninterrupted. The weapon firing should surprise the shooter just a bit. Focus on good sight picture and breathing, while slowly pulling the trigger. If you place too much thought into pulling the trigger you will neglect the sight picture and breathing aspects. Once the trigger is pulled and the weapon fires, the shooter should follow through, ride the recoil and let the sights naturally fall to the point of aim.

These are the basics of loading and shooting a muzzle loader. Happy and safe shooting, everyone.